Previous
Next
The Harringworth Viaduct, also known as the Welland Viaduct and Seaton Viaduct, is a railway viaduct crossing the River Welland between Harringworth, in Northamptonshire, and Seaton, in Rutland. At 1,275 yards (1.166 km) long and with 82 arches, each of which has a 40 feet (12 metre) span, it is the longest masonry viaduct in the United Kingdom.

It lies on the Oakham to Kettering Line and carries the twin track non-electrified line between Corby and Manton Junction, where it joins the Leicester to Peterborough line. The route is generally used by freight trains although there is a daily East Midlands Trains passenger service  between Melton Mowbray and St Pancras via Corby. There are also some steam train outings across the viaduct and these are eagerly awaited by enthusiasts.

Due to the structure’s size, age, exposure and inaccessibility, the original brickwork has suffered from extensive weathering and structural deterioration. As part of the Network Rail Structures maintenance programme, extensive structural repairs have been carried out. Traditional methods and materials were employed alongside modern access techniques to return the structure to its former glory and to ensure the long-term structural integrity of the viaduct as well as the enjoyment of generations to come. The viaduct was originally built from bricks manufactured and fired onsite which had a red face. Repairs have employed other types of bricks, predominantly blue engineering bricks which have better water resistance and are much stronger than commons making them excellent for arch re-lining and face brick replacement, leaving a patchwork appearance.

History of the viaduct (excerpt from Millennium Book)
In 1874 a bill was passed to lay 15 miles of railway line from Kettering to Manton, three quarters of a mile being in the form of a viaduct from Seaton tunnel spanning the Welland Valley to Harringworth, where the station is situated at the top of the hill. Harringworth Station was on the Midland line from Nottingham to London, and this stretch of the line and the bridge was opened by the Midland Railway in 1880 employing three signal men, the Station Master and two porters.

In 1879 the Reverend D W Barrett, vicar of Nassington published ‘Life and Work Among the Navvies’. His object was to supply a record of a special undertaking in railway work, record the manners and customs of the navvies and describe the work of the Church amongst them.

The viaduct was built on land belonging to Colonel Tryon, great grandfather of the present owner, Mr Tim Conant, and Squire Monkton of Seaton. The contractors were Lucas & Aird of London, the local agent being James Eagle, succeeded by Mr Stannard. Midland Company of Engineers prepared a plan and Lucas & Aird carried out the whole of the work, commencing June 1875, the central drawing office being at Gretton. Mr A C Priestly ran the department.

The viaduct has 82 arches of 40 foot span, some 60 foot in height, but the average is 57 foot. 81 of the piers are 6 foot thick except 10 which are of double thickness called ‘block piers’ to isolate the arches in sets and prevent any under strain being continued indefinitely from arch to arch. The foundations of the piers are of concrete. The blue bricks used were made from local clay and the whole structure erected with bricks manufactured on the ground with Derbyshire flintstone, springers, string course and coping. The arches and spandrels are covered with two coats of asphalt. The work contains 20 million bricks, 20,000 cubic yards of concrete, and 19,000 cubic feet of stone. Some of the brickwork is lime, 37,543 cubic yards in lime, 5,826 cubic yards of barrow lime is used in the concrete and mortar throughout, all supplied from Leicester.

The first brick was laid in March 1876, the first arch commenced in June 1877 and the work was completed in July 1878. If the bricks were laid out side by side forming a pathway 5ft 3 in wide, it would reach a distance of 200 miles, ie from London to York.

The miners digging the clay and brick making earned £2.0s.0d a week, the bricklayers £2.10s, a foreman £3.0s.0d, labourers £1.5s.0d and mechanics £1.10s.0d. 120 horses were used for pulling wagons. The men worked long hours, 2 men filling 14 wagons a day. Overtime was paid to men who worked through the night. Navvies from all over the country were drawn to the area seeking work, many came with their families. Two settlements were built, one comprising about 40 huts at the Seaton end and about 12 huts at Gretton Hill. Four hundred men were employed to work on the viaduct. The families were housed first, then many took in lodgers, living anything between six and 13 in a hut. Many of the single men found lodgings in the surrounding villages. A mission hut was built in each settlement by the Curate of the Railway Mission, who was endeavouring to look after the souls of the workers. They were a rough and ready lot, often drunk, fighting and poaching. They had many animals, especially Lurcher dogs, which caused much trouble with the local gamekeepers.

Many traders with handcarts and horse carts brought food to the area and plenty of beer was sold, estimated at 30 gallons per hut per week! The beer was the cause of much drunkenness, despite the efforts of the Curate. There were 40 settlements along the 15 miles of line workings, only 4 of these held Sunday School, and 3 had night schools. About 2,500 men were working along the whole of the line. Many of them lost their lives during the construction, one of them is buried in Seaton Churchyard. See section on ‘Health and Safety on the Manton to Kettering Line’ below for further details.

As the last arch was finished, a gathering of the contractors, foremen and workers celebrated in a large hut in the settlement on the Seaton side, Colonel Tryon being in the chair.

The longest masonry viaduct built across a valley in Britain is a reminder of the impact of the railway on the community. In 1961 the school children were taken to Harringworth Station to see the royal train pass by when the Queen and Prince Philip visited Corby and Stamford. Although Harringworth Station was closed in 1948, and the regular passenger services were discontinued in 1967, the line is still used for freight and the viaduct remains Harringworth’s most striking landmark.

Health and Safety on the Manton to Kettering line
In addition to constructing the viaduct, the crossing of the Welland Valley also involved the building of two major tunnels (Corby -1,920 yards and Glaston -1,842 yards). As the work was clearly very dangerous, F. W. Brown was appointed as surgeon in 1876 for the stretch of line between Gretton and Manton. The complexity of the work resulted in numerous accidents and fatalities. The details below give an insight into the human cost.

June 2nd 1876. John Green whilst at work on the cutting at Seaton fractured his thighs and incurred other injuries when he was unable to avoid several tons of falling earth.

On the same day, scaffolding which was 20ft high at Glaston tunnel collapsed throwing nine men to the ground. Miraculously, the most serious injury was a compound dislocation of an ankle.

October 13th 1876. Joe Bedford died from spinal injuries falling a fall from the scaffolding on the viaduct.

May 4th 1877. Frederick Smith, a horse driver at Glaston tunnel died from injuries incurred whilst was running brick wagons. The brakeman heard Frederick cry and on going to him found him insensible. It is thought that an obstruction may have caused the horse to bolt, throwing him to the ground where he was trampled.

June 1877. John Stone was killed when he fell 130ft down number 4 shaft hole at Glaston.

12th August 1877. John Pickwick was killed when he fell 140ft down number 3 shaft hole at Glaston.

14th December 1877. Alfred Hide age 13, died at Glaston tunnel whilst attending an engine fire. Sadly he had got caught in a cog wheel which drew him into the engine!

January 1878. Levi Spencer was killed when he fell 130ft down number 1 shaft hole at Glaston. John Williams was ripped and killed between a truck and an engine without buffers on.

May 1878. William Hart, a fireman, attempted to climb onto an engine whilst it was in motion. He slipped and one of the attached trucks crushed his right leg. He died from his injuries.

July 12th 1878. George Smith age 13, died when he was run over by a locomotive whilst cleaning out the ashes of an engine. He had been warned that the locomotive would be passing on a regular basis.

The railway also created safety hazards for Harringworth village, as there were instances where the sparks from the engines set fire to thatch cottages.

Crime
Theft was quite a problem, particularly in the canteen at Seaton and there is a record in February 1876 of George Williams losing 8s.1d. whilst drunk in the shanty. More seriously, on 6th September 1878, William Stone, a foreman bricklayer at Glaston tunnel attempted to murder his wife. She had found out that he was already married!

Traffic over the viaduct
As a through passenger route the Manton to Kettering line was designed to give Nottingham a more direct link with London. When it opened on 1st March 1880, eight trains were scheduled, four in each direction.A new train called the Slip Coach joined the line on October 1st 1885. This left Oakham at 9.55 where it connected with fast trains to London, Northampton, Cambridge and the Eastern Counties at Kettering. The return journey from Kettering connected with the 17.30 St Pancras to Bradford train. By 1903 the line was carrying over a dozen express and stopping trains each way daily. The strategic importance of the viaduct in moving troops to the channel ports during the Fist World War may explain the Zeppelin attack in 1916 (click here for more information).

Closure of Harringworth Station, 1948
In 1947 Harringworth station was used by an average of 15 passengers a day, bringing in revenue of £101. This was not economic and, with good alternatives at Seaton and Gretton, the decision was taken to close the station in 1948, resulting in an estimated annual saving of £909 (this excludes £448 required for maintenance if the station was to remain open).

We would like to thank Glyn Dobbs for these lovely photographs which were taken in 2004. 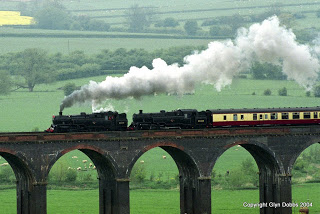 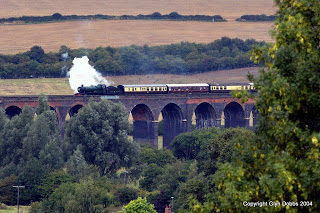